Around 8,000 people live in this Central Queensland town. Best know for its mining – both historical and current – it’s an interesting stop along the Capricorn Highway and a great place to stay if you’re heading up to the Blackdown Tableland National Park.

When we told people we were going to stay in Blackwater, rather than just drive through it, they were a little surprised. While I’d say a one night stay is more than enough, we really enjoyed our layover here before leaving nice and early to head up to the top of Blackdown Tablelands before it got too hot to hike.

There’s also a great spot here to see the tablelands and enjoy the sunset – just drive up to the end of Sagittarius Road, turn around and pull into the side. The only other things you’ll see are learner drivers, a cyclist or two, and some kangaroos.

What to do in Blackwater

Australian Coal Mining Museum – marvel at the sheer size of mining equipment, learn about how coal was formed millions of years ago, and see the innovate technology on display. It’s not open at the weekend though. The museum is inside the Blackwater International Coal Centre, which is where you’ll find the Visitor Information Centre too. There’s also details on getting a tour of the mine itself.

Japanese Gardens – supposedly the best in Queensland, these gardens mark the relationship between Blackwater and its Japanese Sister City, Fujisawa. Open every day between 9am and 2pm.

War Memorial – someone told us that the trees in front of this memorial, located on Arthur Street, were seeded from trees at Gallipoli, but I don’t know if that’s the case.

At the Coal Face – this monument on Mackenzie Street remembers those who have lost their lives in coal mining accidents.

Lions Park – there is an old steam engine, a community run visitor information centre based inside the old railway station building, and a flag display (supposedly the largest outside of the UN) which captures all the different nationalities of people working in the mine.

Where to eat in Blackwater

If you’re after something quick or just passing through, there’s a McDonalds, a Subway, and a Pizza Hut as well as the shop at the service station. There’s also a Woolies if you want to get food to take with you, but it closes at 6pm on a Saturday and doesn’t open on Sunday.

If you’ve got time to go for dinner then head to the Capricorn Hotel or 21 Doon at the Black Rock Inn.

We ate at the Capricorn Hotel. It’s standard pub grub with big portions and nice staff. Cheapest main was $20, and the steak is $35. They also do take away pizzas.

Where to stay in Blackwater

We stayed at the MAS Blackwater Central Motel for $140. Great customer service from Julie, comfy bed, clean room, and a continental breakfast of cereal/yoghurt/toast included. There’s also a small kitchenette which was really helpful; we put bottles of water in the freezer to take to the tablelands with us and kept our picnic food in the fridge overnight. 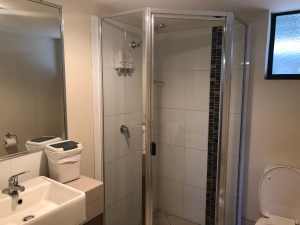 If you’re interested, there’s a good summary of the town’s history here. See what else there is to do along the Capricorn Highway here.

If you have any questions, want help planning a trip to Blackwater, or have an idea for a guest blog please email contact@talbahtstravels.com.